I. Development of Breeding Industry in Indonesia

As the largest island country in the world, Indonesia has large sea areas and the topical climate which are suitable for fish to grow. Since the establishment of marine and fishery department in 2000, Indonesian fishing economy has been growing. It became the third biggest fish producer country globally with a harvest of 10.83 million tons in 2010. In 2014, the production is more than 20 million tons. Aquatic product market around the world has increased sharply in the past few years and this trend is expected to last 5-7 years. Aquatic products are the major sources of protein in Indonesia. The Indonesian government regards the marine and fishery as the important areas of the country’s industrialization. Since 2011, under the great support of government, aquaculture area in Indonesia increased sharply. In the northern island of Java, merely, there are 200,000~300,000 hectares of fish ponds and shrimp ponds in production.

In the early 14th century, Indonesia has begun to cultivate milkfish, catfish, tilapia, black carp, grass carp, silver carp, bighead carp, rosenbergii and prawn in the pond. Fish culture in paddy fields also has a long history. Due to the Indonesian government attaches great importance to the construction of fish and shrimp farms and the development of cage culture. The fishery industry gradually shifts from fishing on fisheries aquaculture. The areas of seawater and freshwater fish are increasing. Shrimping and raising are developing at the same pace. In recent years, on the basis of packing equipment and the introduction of foreign investment, the exports of aquatic products have increased significantly. Indonesia occupies a prominent position in the world’s market of aquatic products.

Indonesia is an agricultural country with the cultivated area of 80 million hectares and 42 million people engaged in agriculture, which provides a broad space for animal husbandry development. In recent years, in order to improve national nutrition level and reduce imports, the Indonesian government vigorously develops animal husbandry, emphasizes intensive management and develop large and medium-sized chicken farms, pig farms and dairy farms. Goats, cows, sheep, chickens and ducks are the main animal breeds in Indonesia. At present, domestic fresh milk production can only meet the demand of 23%(2.89 million tons), that is to say 77% of fresh milk have to be imported. To increase domestic milk production, the Ministry of agriculture is ready to develop dairy livestock farming, such as cattle, buffalo and goats.The Indonesian government plans to increase domestic milk production within the next 6 years to 4 or 5 million tons, so that by 2020, the production can meet the demand of 50%. Compared with other southeast Asian countries, the consumption of poultry(7.36kg/person\year) and eggs(74/person\year) is relatively low. The Indonesian government is keen to support the development of poultry sector in a sustainable way. Between 2011 and 2015, poultry market is expected to increase 26.7% to 10 billion euros per year.

Indonesia is a big population and agricultural country which have 80 million hectares of cultivated land and rich material resources. With a wet and rainy climate and abundant sunshine, the crops have a short growth circle. The main crop of Indonesia is rice. Like maize, wheat, cassava, and beans are the grain crops. In addition, there are a wealth of cash crops, such as palm oil, rubber, coffee, etc. Therefore, in Indonesia, there are abundant resources can be used in making animal feeds and aquatic feed, such as palm meal, wheat bran, rice bran, rice bran meal, beans, soybean meal, corn, cassava, fish meal, fish oil, and green(grass, broad leaves of grass),etc. 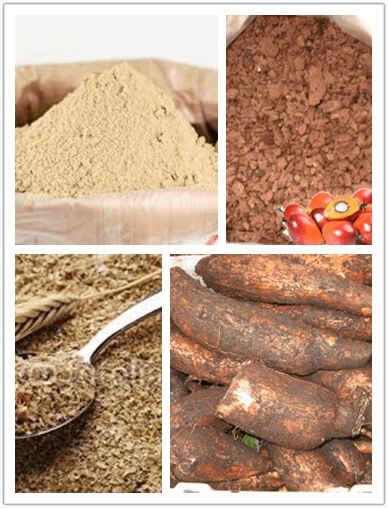 Rice bran: Rice bran contains protein, vitamins, minerals, etc. And the content of protein is no less than 12.5%. As to ruminant, it has high energy and good palatability. Added appropriate amount of rice bran is extremely helpful to dairy cattle and beef cattle. And it is a good feed for fish. With the rapid development of marine fisheries rice bran becomes an important raw material for making fish feed pellets. Because the stable food grain is rice, it can reduce the cost of production.

Rice bran meal: Rice bran meal can transform starches into oligosaccharides, it can increase the rate of absorption and transformation. It has a fragrant odor and high palatability, which can greatly improve the growth rate.

Cassava: cassava as a local crop, featured with low price and high nutritional values, it is widely used in making animal feeds. The starch in cassava has a higher digestibility than corns. They are mainly raw materials for energy which widely used in poultry feed and ruminant feed.

Oil palm kernel meal: Palm meal is made of palm fruits, which are rich in vitamins, protein, amino acid,etc. it is the by-product of extracting palm oil, featured with balanced of nutrient-rich, good palatability and high digestibility. It is not only can replace the 10~30% of corn, but also can be used for protein materials. Widely used in pig feeds and poultry feed.

Wheat bran: Wheat bran also named oatmeal, it is by-product of wheat flour processing industry. It is rich in protein, cellulose and vitamins. Featured with high nutritional value, low cost and high digestibility. What’s more, wheat bran is the protein ingredient of animal plasma. Due to the price of wheat bran is lower than animal plasma, it can greatly reduce the cost of production.

Beans: Beans are the main food grain in Indonesia. Beans and soybean meal are widely used in making animal feeds. Variety of amino acid in soybean meal not only can meet the nutrition needs of poultry and pigs, but also can satisfy the special needs of amoni acids for fish. Featured with easy absorption and good palatability. Soybeans can increase intake of animals and improve the efficiency of animal feeds to promote the growth.

Fish meal: Fish meal is a high-protein feed. It contains crude protein of 60%, and the crude fat doesn’t exceed 12%. Adding fish meal can guarantee the faster growth of animals, especially for aquatic animals.

Fish oil: Fish oil is a high energy material which features with protein conservation. It can improve the energy of feeds and reduce the feed costs. Adding some fish oil can promote the growth of the animal. It has high feed convention rates and low feed(bait) coefficients. Unique smell of fish and high palatability makes them more temptation for fish.

Corn: Corn, as the main raw materials for feed, which is rich in crud protein. With better bonding strength, they have high foaming properties in water. But they can’t satisfy themselves in Indonesian domestic. On the one hand, they depend on importing from the United States and Brazil; on the other hand, they are devoted to improve the varieties of corn. With the influence of Government policy, there are more and more farms begin to plant corns in Indonesia. Most of imported corns are used for making chicken feed.

Animal feed industry plays a very important role in the development of animal husbandry. In Indonesia, animal feed industry is promising. In 2013, the production is about 14.8 million tons. In 2014, it is up to 15.5 million tons. For the fish farmers, feed is the main expenditure, which accounts for 40%-50% 0f the total cost. Fish feed requirement will continue to increase. But until now, the animal feed industry is still dominated by foreign factories and most manufacturers also rely on imported raw materials. About 70% of the raw materials are imported, especially corns are mostly imported from the United States and Brazil.

The high price of imported raw materials results in soaring feed prices in the domestic market. In view of this situation, the government starts to develop small feed factories and now these factories spread across 38 locations, including production of raw materials such as corn and palm oil. Small feed mill production capacity is about 3-5 tons per day. In the local market, it is in abundant supply, which is definitely a good measure for fish farmers and local farmers. So small fish feed pellet mill machine is more popular. Meanwhile, other pet food is expected to maintain rapid growth in Indonesia, such as birds, reptiles and other small mammals. By this taken, Indonesian feed market shows great potential.

To sum up, it is not hard for us to find out that many small or middle size feed mills existed in Indonesia in order to achieve their domestic need. As we all know, aquaculture industry has a great development in recent years, but due to most of raw materials are imported from the other countries, the Government devotes to develop small feeding factories. So  the machine with high quality and low energy consumption is of great important for Indonesians.