I. Aquaculture Industry in the Philippines

The Philippines is an archipelago that consists of 7,107 islands with a total land area of 300,000 square kilometers. Its sea area is about seven times larger than its land area and rich in aquatic resources. Aquaculture in the Philippines has a long history. Most of the production comes from the farming of seaweed, milkfish, tilapia, shrimp, carp, oyster and mussel. Aquaculture contributes significantly to the country’s food security, employment and foreign exchange earnings.

According to the Country STAT Philippines, the gross domestic product of the Philippines in 2013 amounted to 12,634,063 million pesos. The total output value aquaculture production to 93,949mill pesos, accounting for over 0.74 percent of GDP. As shown in Table 1and Figure 1, this sector’s contribution to GDP has decreased in recent years.
Table 1: Contribution of aquaculture production to Gross Domestic Product and Agricultural Gross Domestic Product (Source: Country STAT Philippines, 2015) 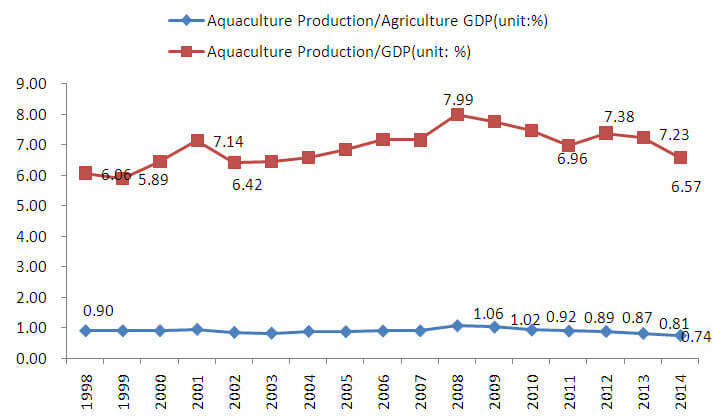 II. The Aquaculture Feed Production and Demand in Philippines

The feed ingredient resources including major feedstuffs, other feedstuffs, non-conventional feedstuffs, fats and oils, vitamins and minerals, feed additives.
The major feedstuffs available for the aquafeed pellet production are rice bran, yellow corn and corn bran, wheat and by-products (pollard and bran), copra meal, soybean, soybean oil, fish meal, meat and bone meal. Rice bran and copra meal are sourced exclusively in the country. Yellow corn is produced locally in large quantities although some importation has been necessary in recent years due to shortages in farm production. By contrast, all the soybean oil meal is imported, whilst limited amounts of fish meal and meat and bone meal are produced locally. Wheat and its by-products on the other hand are produced by local flour mills from imported grains.

Other imported feedstuffs commonly used within aquaculture feeds include meat and bone meal/greaves/offals, crustacean meal/flour, squid liver meal, fish solubles, and brewer’s yeast. With the exception of squid liver meal and fish soluble, all these feedstuffs are also produced locally although the volume of production is small.
There are very many non-conventional feedstuffs content. These feedstuffs are suitable for use within farm-made aquafeeds for semi-intensive culture where quality is not as critical and volume requirements are not large. To date, only cassava meal, ipil-ipil leaf meal, and brewer’s yeast have “graduated” to conventional use in aquaculture feeds.

In the past, fish farmers often use vegetarian feed and trash fish to feed fish. These costs relatively low, but these feed materials are with poor digestibility and palatability and do not meet the nutritional needs of various types of fish. It is easy to raise fish malnutrition, reduce the resistance and increase the chance of infection of the disease. In addition, these feeds will be used more ration, and feed residues accumulate that in the pool can cause water pollution and affect the sustainable development of aquaculture. The future growth of Philippine aquaculture may not be sustained unless new feed are used. Pelleted aquatic feed pellets processed by pellet mill technology can solve these problems.

IV. Use Pellet Feeds for Sustainable Development of Philippines Aquaculture

In recent years pellet feed is also becoming popular. Pelleted aqua feed is denser and lower in moisture content than the natural feed and can reduce the segregation of the ingredients; pelleted feed can reduce the feed waste in the water and so it can improve the water quality. In addition to this, pelleted aquatic feeds have many good features: resistant storage and transportation (pellet feed can be stored for two to three months when store in a covered cool dry place), hygiene (conditioning process can eliminate most bacteria in feed ingredients), complete nutrition (Can be added with animal or plant protein fish oil or other fats, vitamin complex and minerals required by specific fish species. It is highly nutritious and can effectively improve the health of fish stock), environmental pollution/impacts (Using pellet feed of appropriate size and density can lower the loss rate and significantly mitigate the environmental pollution caused by the feed residue). In addition，the price of dehydrated trash fish is similar to that of dry pellet fish. Considering hygienic and nutritional value, pellet feed is cost effective.

As we have mentioned in the first paragraph, the main cultured aquatic farming species in the Philippines are milkfish, tilapia and black tiger shrimp and the aquatic feed production are milkfish feed, tilapia feed and shrimp feed. However according to the different eating habits, some of them prefer to eat the pellet on the bottom of the pound where as some of species like to come on the surface to take pellet and some are column feeders, taking the feed as it slowly sinks through the water. Thus based on the different feed pellet types(floating feed form or sinking feed form), it is advised to choose different aquatic feed pellet machine.